skip to main | skip to sidebar

This is hard. I'm just going to throw this out there and try not to worry about typos, grammar and the ongoing search for the perfect sentence structure. I get caught up in my own head too much, which stops me from writing here. I haven't posted since September. Not because life has been totally boring. With 2 young boys, a full time job and a husband, it is anything but.

I want to write here. I want to have a place to capture my thoughts, life experiences, etc. I want to be better able to capture snapshots of my children's lives, and I don't scrapbook often enough for that to be sufficient.

I want to be a part of this community. I don't want to get caught up in the drama, although it can be fun to watch from afar. But I love seeing the relationships that the blogging community has fostered. The women and men who's writings I follow speak to me so deeply. I learn from them. I cry when someone is hurting. I laugh out loud at the foibles of others. I've donated money to those in need. They inspire me every day.

I feel like I know a lot of these people IRL, but I don't. Because I don't participate.

The reasons that I rarely post are varied, but largely boil down to nerves and self-confidence (lack thereof). My thoughts never seem to translate to the page the way I hear it in my head, so I just don't bother. When faced with a blank post or an empty Twitter box, I freeze up. What if it isn't good enough? What if I get mocked. Being ignored doesn't bother me, but I don't have a very thick skin...the thought of someone posting something mean or even just misunderstanding what I'm saying makes me nervous.

I love to read though. I read blogs and Twitter feeds voraciously. I come here for product recommendations, TV show recaps, gossip and a glimpse into the every day lives of others. I come here for the human touch, the humor and the tears.

I'm also lazy. I write for a living - medical, science-y stuff that also has to pass muster with my clients. Stuff that has to be perfect, lest we miss a data point, incorrectly describe a MOA or provide incorrect recommendations. That is tiring. So, when I'm back online at the end of the day, I want to be able to just write with no strings attached. But I always attach those strings anyway and they keep me tied to my silence.

So, in an effort to put myself out there. I'm just going to hit publish. Maybe.

Edited to add: I also know that this is self indulgent. With all that is going on in the world, I know that my writer's block (or chicken shittedness, if you will) is at the very bottom of the heap.
Posted by Jessica V. at 8:57 AM 2 comments:

Wow. I can't believe this day is really here. This spring, when we were trying to figure out what school to go with - sending in applications and going through interviews - it seemed that this day was light years away.

And now it is here. 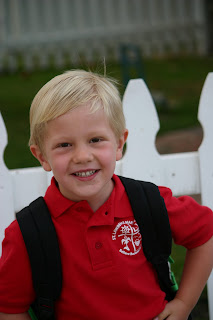 I was nervous. You were not. I nearly cried. You did not. I'm so proud of you. I don't know where you get all your confidence - but it is one of your best qualities. You were so excited and funny. Posing for pictures like a model (your choice) and squealing when we saw Andrew, then you grabbed his hand and followed your class into the school with barely a look back at me. 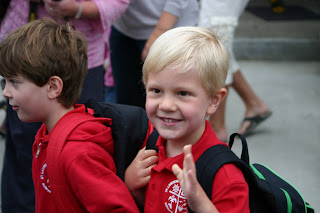 I can't wait to pick you up and hear all about your day.

Love you buddy!
Posted by Jessica V. at 9:46 AM No comments:

BTS Shopping - the dream and the reality

Jack and I hit Target last weekend to get his Back to School supplies. We had been talking about it for a while and I was super excited to go do this together. Jack - not so much.

I always loved going shopping for back to school stuff, and, as this is his first year in "real school" I wanted him to be excited too. I had promised that he could pick out any backpack that he wanted, which he was looking forward to. We also had many discussions about lunch boxes - he wanted a themed lunch box, but I knew those were likely going to be too small for our needs (I have to pack lunch and snacks next year, so it needs to be roomy). I explained to him, multiple times in advance, that he would get a plain lunch box, but he could pick any thermos or other containers to in it, and those all had superheroes and characters on them. Good compromise, right? Riiigggghhhhtttt.

So we go to Target (BTW - this was in late July and the BTS sections were CLEANED OUT! I hope they plan to restock soon.) and hit backpacks first. Of course, they were sold out of the Ben 10 one Jack wanted, but he picked a Bakugan one instead, and seemed fine with the alternate choice (or so I thought).

Then, we hit the lunch box aisle. Now, remember, I had prepped him multiple times in advance that we were getting a plain lunch box, and while he was initially not thrilled with the choice, he had agreed. Before we left the house. So I again thought that picking the fun thermoses and containers would be fun for him. Again, not so much.

We argued for 20 minutes over which one we were getting. He HATED the one I picked. Didn't give a rip about the thermoses but was desperate for ANY box that had characters on it. Oye. Definitely not the picture perfect mother/son bonding experience I was hoping for.

Ultimately he agreed to the box I picked, and he chose his accessories so we could get the hell out of there. (Also? Mommy had to really let go of her need for everything to match since he picked a Transformers snack container, a Spiderman thermos and another container that had the Clone Wars on it. I'm still twitching over that!).

All in all, he really was good, just not nearly as into this as I was. And he is super excited to start at his new school, so that is awesome.

Of course, the next day, he told me, quite sadly (little manipulator), that he REALLY wanted the Ben 10 backpack...and I am a GIANT sucker, so I found one on Target.com (free shipping!) and ordered it. It will be here tomorrow. He's finally excited. SUCKA!
Posted by Jessica V. at 11:12 AM No comments:

My Target cart is empty...

Quick post to capture a random and annoying thought...next week we will be purchasing Jack's school uniforms (!), which means:

a) he's growing up (sob!)
b) back to school stuff is starting to appear in the stores :-)!*
c) I really need to cut back on the random t-shirt purchases at Target and/or Carter's** since he won't need as many clothes as before...now what am I going to do when I'm bored/depressed/feeling sluggish and can't justify any more shoes for myself?

*I CAN NOT FREAKING WAIT to go BTS shopping with Jack to pick out his own backpack and lunch box...so excited!

**I love the Carter's store...the clothes for older (read: non toddler) boys are still so cute, colorful (CHEAP!) and devoid of scary skull images (I'm talking to you! Target boys department!). It was a sad day when Jack moved out of the 5T sizes and we ventured into the "other" side of the aisle in our beloved Bullseye store. Those clothes are NOT CUTE! and Jack still is. So there.
Posted by Jessica V. at 10:02 AM 1 comment:

Scenes from a Vocabulary Lesson

Jack: "Mommy, can we go back to the rides after lunch?"
Me: "I doubt it buddy, it is Benny's nap time (and mine)"
Jack: "What does 'doubt' mean?
Me: "Doubt is when something is probably not going to happen, but you aren't quite sure." (I'm 'doubtful' that this is the complete and accurate definition, but it was relevant to the moment.)
Jack: "Well, there is NO doubt that we are going back to the rides today!"
Me: !!!

It is a gorgeous day here in Southern California. Sunny, clear and warm. Spring has sprung, flowers are in bloom and it is a perfect day to sit back and celebrate the life of a little girl who left us one year ago.

One year ago we lost Maddie Spohr and her passing has inspired thousands of people to write, donate, love, cherish, and count their blessings. In her passing, there has been a movement to keep her memory alive, surround her family with love, celebrate her life and work toward a cause to help others.

A few days after Maddie's passing, inspired by the energy of the online world as we all grieved with Mike and Heather, I found the courage to put some words on "paper" and write my first posts. The first was just a warm-up, flexing my fingers. The 2nd post was for Maddie.

Today I'm wearing purple in Maddie's honor, I'll make a donation in her name and on April 24 I will March for Babies here in LA with many other members of her team.

We miss you every day Maddie. I believe that the beauty of today is your way of sharing the beauty of your existence with those of us here thinking of you.

Big hugs to Mike, Heather, Annie and Rigby today and always.
Posted by Jessica V. at 9:37 AM No comments:

Jessica V.
I'm a working mom, living in the 'burbs of SoCal with my husband, two kids and evil cat. My life is chaotic, rarely bucolic and generally entertaining - at least, that is what I keep telling myself!